Ginkgo Biloba is considered as one of the top-selling natural supplements on the market thanks to its many benefits. The supplement offers a range of health benefits including supporting healthy brain function, memory, and mental alertness.

Besides, it contains very high levels of terpenoids and flavonoids which are antioxidants that offer protection from harmful free radicals.

However, with so many Ginkgo supplement brands out there, finding the best one is not as easy as you may think. This is because some brands contain additional ingredients besides the Ginkgo thereby making them less potent. Others contain gelatin which makes them not vegetarian-friendly.

But don’t worry because we have narrowed down for you the top 10 best Ginkgo Biloba supplements currently on the market. Check them out. 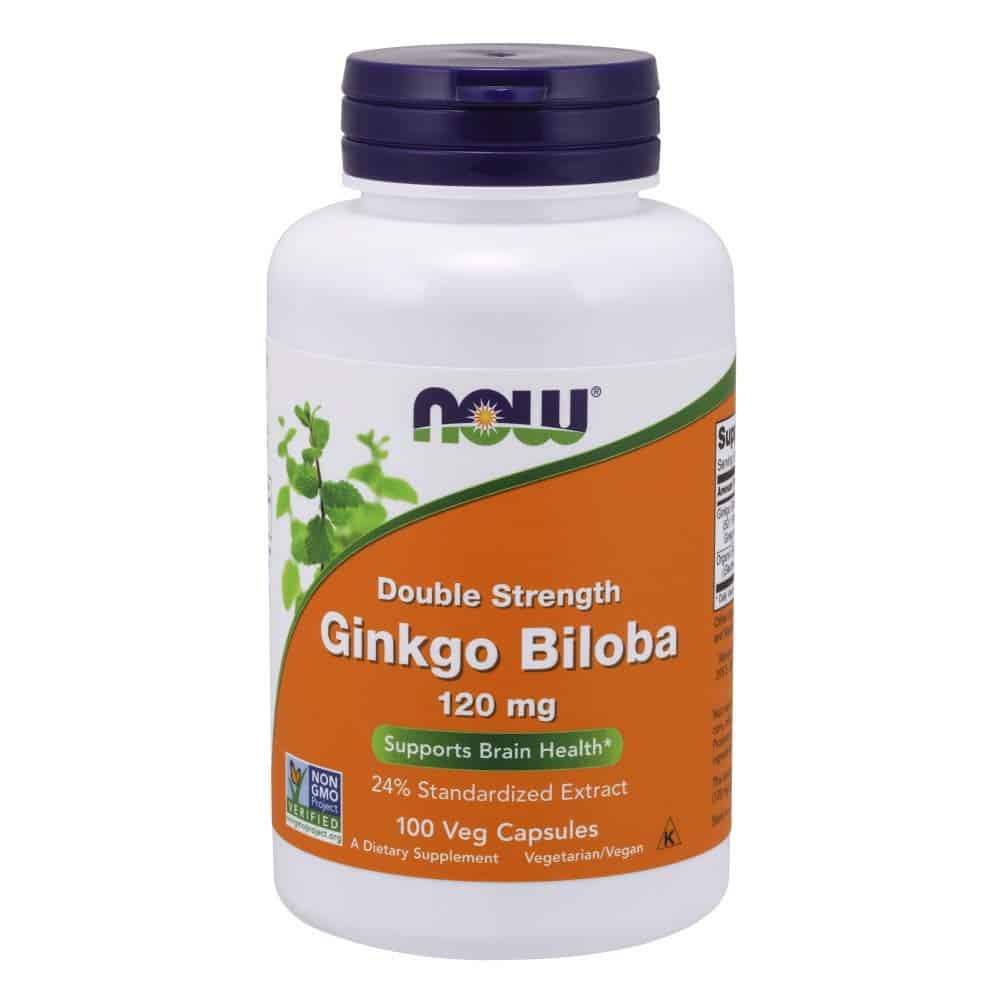 Now Supplements has been a pioneer in the healthy foods and natural supplements industry since 1968. The company prides itself on offering top quality and affordable dietary supplements, vitamins, and minerals. And their Ginkgo is no exception.

The formula contains 24% flavone glycosides and 6% terpene lactones that may help neutralize free radicals. What’s more? Each serving of the supplement contains 120 mg dose of Ginkgo Biloba extract. As such, it is relatively potent since the optimal dosage is between 120mg and 600mg.

And you know what the best part is? A single bottle contains 100 veg capsules with each going for $0.08. Therefore, it seems quite affordable. 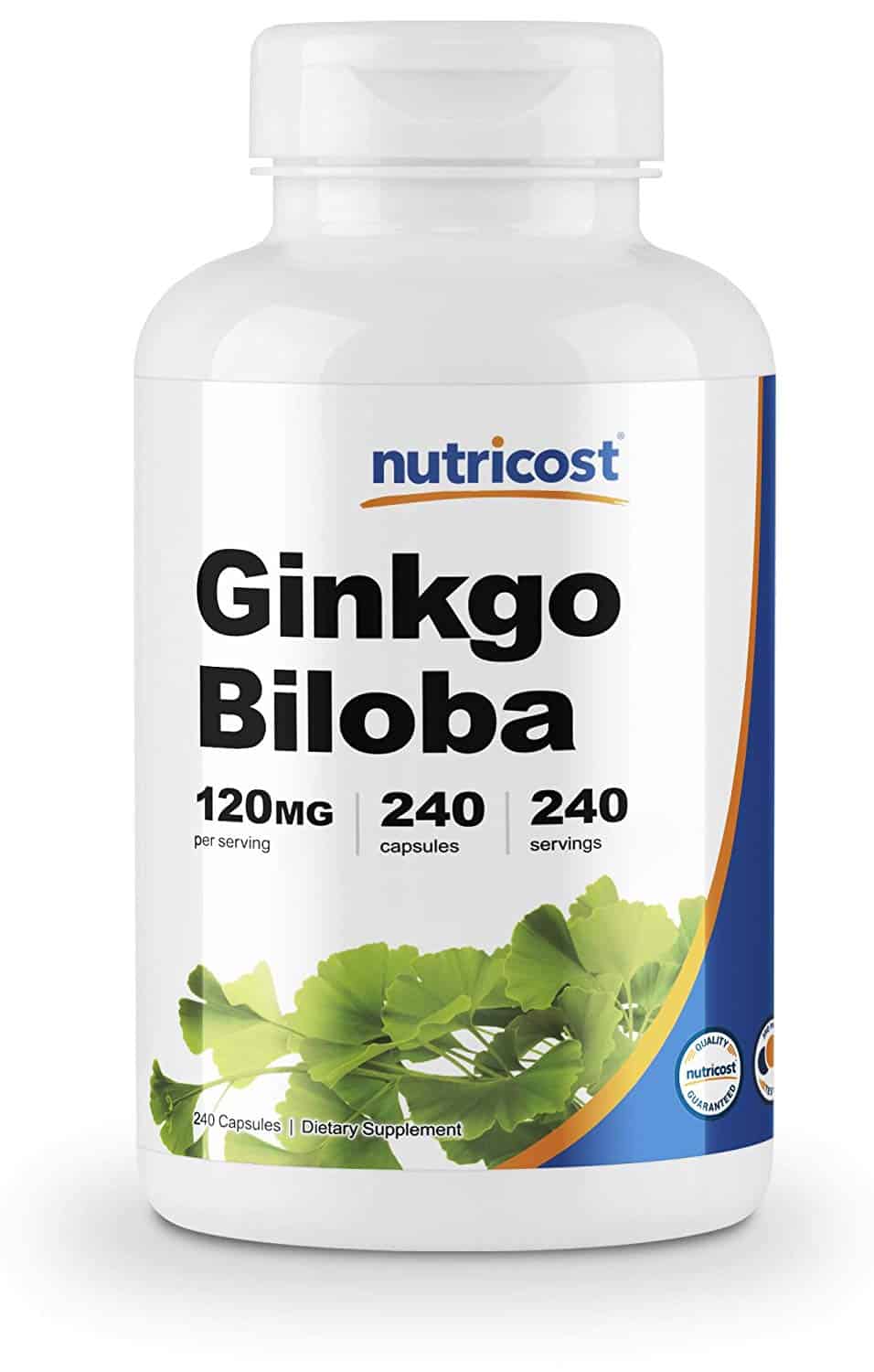 Nutricost has a rich history of providing high-quality supplements that are made of the purest ingredients. All their products including Ginkgo supplements are made in an FDA registered and GMP compliant facility.

As far as the potency of this formula is concerned, each capsule contains 120mg of Ginkgo which is 24% flavone glycosides. As such, we can say that it is highly potent.

However, it contains rice flour as a filler ingredient. Also, the capsules contain gelatin and purified water which makes them not vegan-friendly.

On top of that, the supplement includes 240 capsules per bottle that are easy to take. Each capsule costs $0.05 which is no doubt extremely affordable. 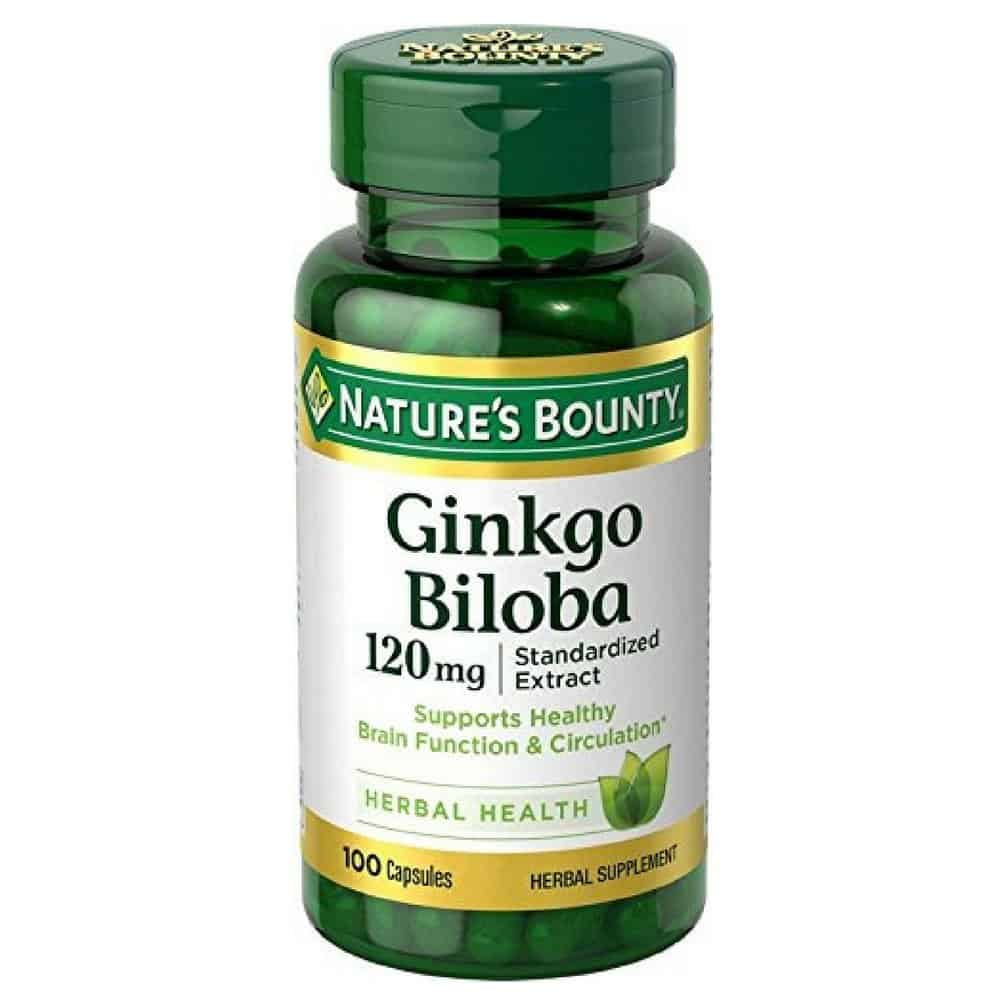 Based in Bohemia, New York, Nature’s Bounty has been producing trusted products that are backed by science for nearly 50 years. They claim that all their supplements are made with the finest ingredients which makes them of unsurpassed quality.

But how is their Ginkgo? Is it potent enough, you might wonder? Well, each capsule contains 120 mg of Ginkgo Biloba extract which has been standardized to contain 6% terpene lactones and 24% flavone glycosides.

Overall, we can say this is an optimal dosage. Therefore, with just one capsule per day, it may help support healthy brain function and mental alertness.

But here is the best part; in every bottle, you get 100 capsules with each going for around $0.078. This is relatively cheaper compared to those from Now Supplements. 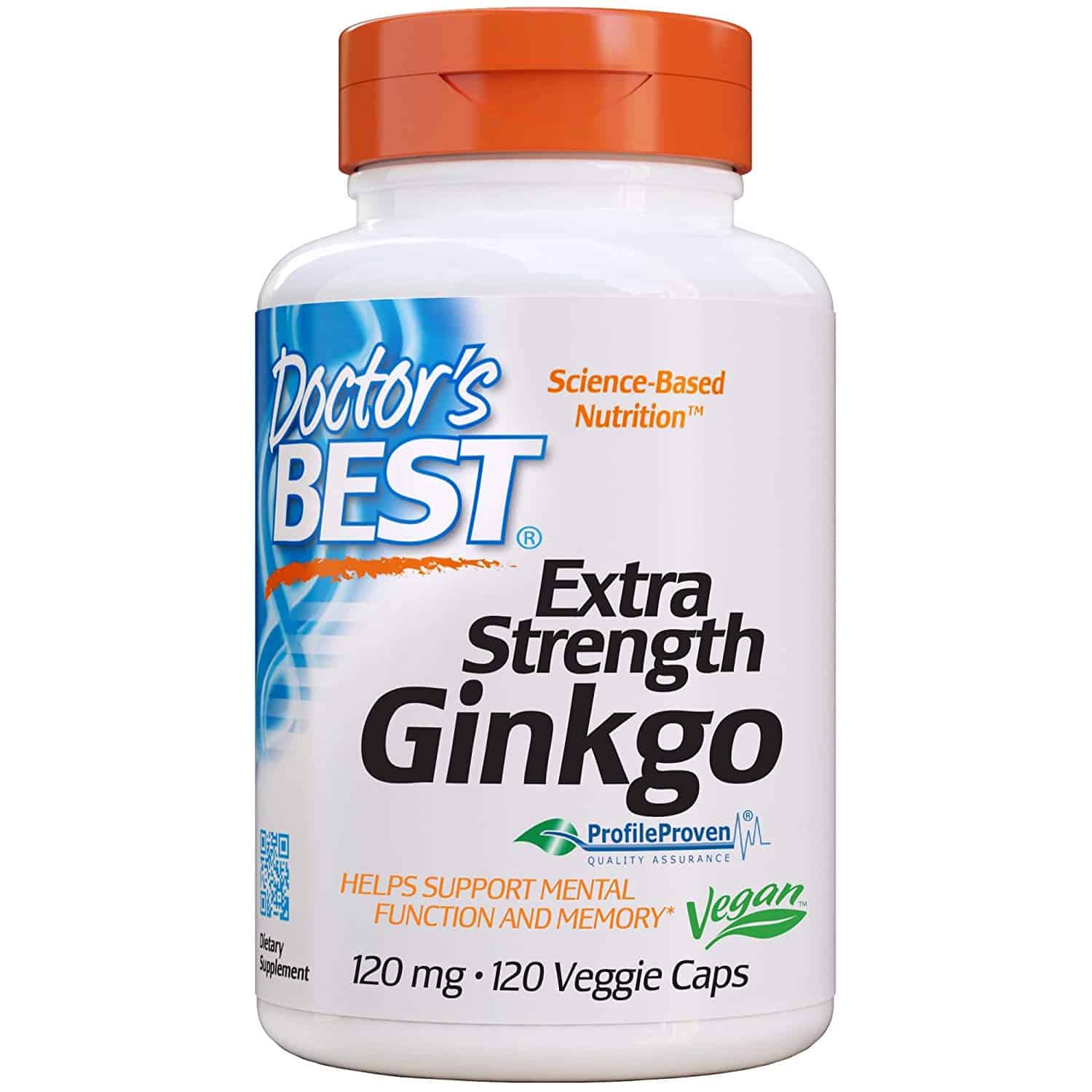 If you are looking for vegetarian/vegan-friendly Ginkgo, this extra-strength formula by Doctor’s Best is worth considering. Founded in 1990, Doctor’s Best is a science-based supplement company that offers a wide range of products.

Their Ginkgo extract is made as per ProfileProven Quality assurance system which includes the most extensive screening and testing. This ensures the purity and potency of the supplement.

On top of that, the formula is standardized to contain at least 24% flavone glycosides and 6% terpene lactones. This makes it highly powerful in antioxidant properties. Other ingredients include silicon dioxide, microcrystalline cellulose, and modified cellulose.

Containing 120mg of the extract per serving, the formula is potent enough to support healthy circulation in the brain. It can also be used to support efficient mental performance.

Similar to Nutricost Ginkgo, each capsule costs $0.05. However, you only get 120 veggie capsules per bottle compared to the 240 in Nutricost.

Oregon’s Wild Harvest has been offering pure and potent herbal supplements since 1994. Their Ginkgo is the perfect combination of a pure, clinically-dosed, and natural supplement.

But here is the best part; each bottle usually undergoes rigorous in-house testing to ensure the formula is 100% pure. On top of that, the supplement is also third-party tested in an independent laboratory for purity, potency, and identity.

One downside though with this formula is that it’s relatively expensive since each capsule costs around $0.2. However, it’s more dosed than most supplements which explains why it’s a bit pricier. 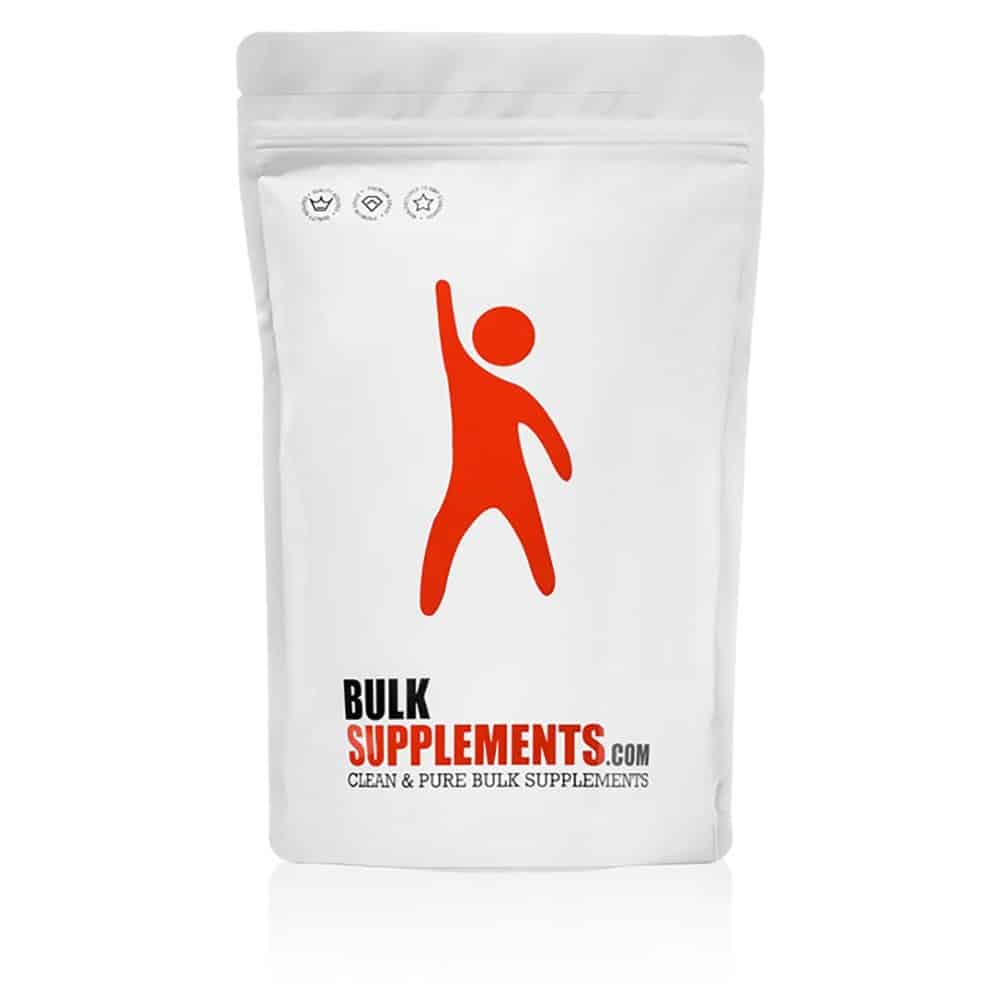 Looking for the best Ginkgo supplement in powder form? Well, you might as well try this one from BulkSupplements. Manufactured in the USA, this formula is made in cGMP compliant and FDA-registered facilities to ensure you get clean and pure powder.

As far as ingredients are concerned, the powder includes 175mg of Ginkgo extract. While it has a high potency level, the formula is not standardized to ensure better performance.

What’s more? The powder is packed in a factory-sealed foil zip pouch to ensure to it is not contaminated.

Besides, each pouch contains one kilogram of the supplement which is equivalent to 35.27oz. And each ounce costs around $0.99 which is relatively cheaper. 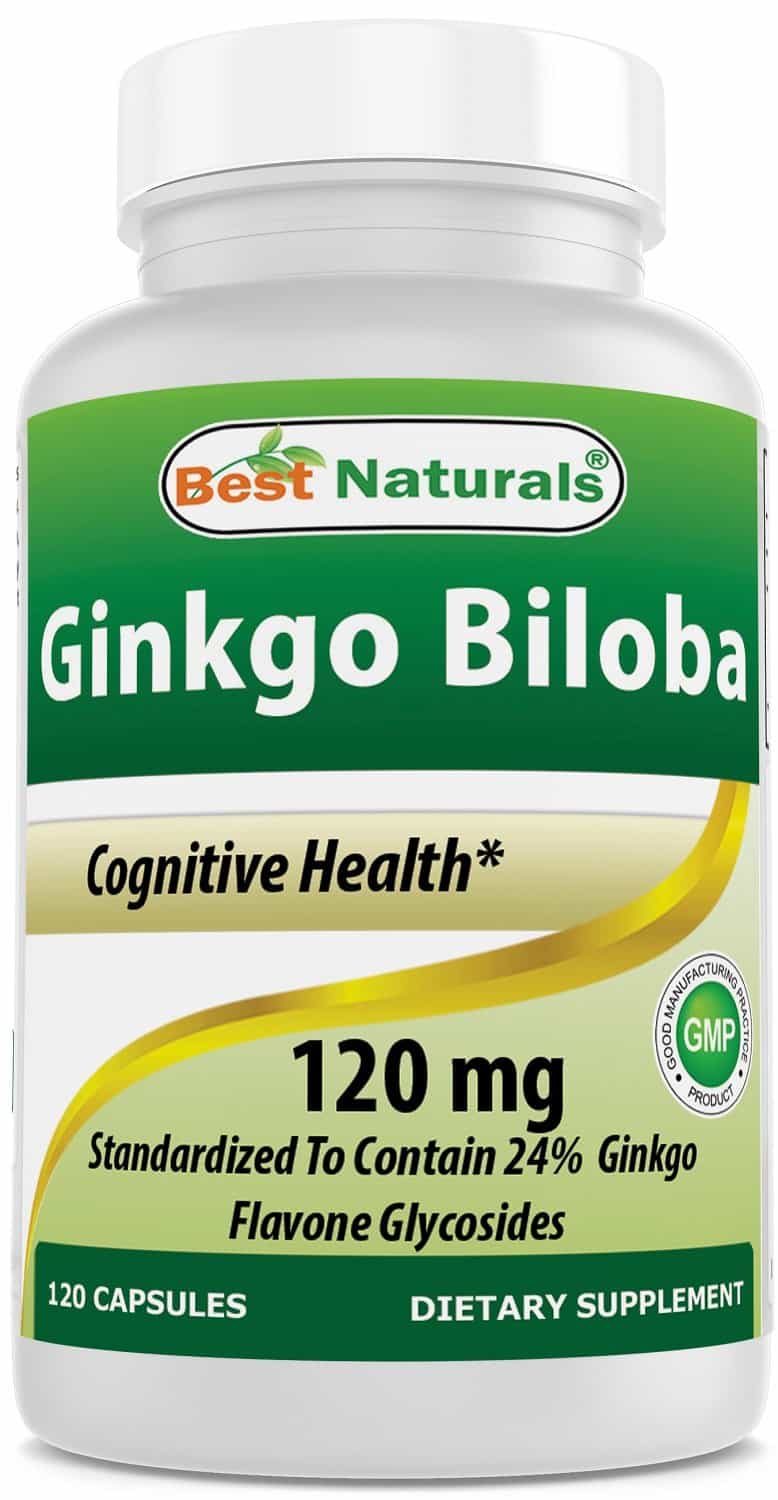 Best Naturals is a New Jersey company that takes pride in developing innovative and high-quality nutritional supplements. Containing 120 mg of Ginkgo Biloba extract, there is no doubt that their formula is highly concentrated.

But here is the best part; the Ginkgo has been standardized to contain 24% (28 mg) flavone glycosides. As such, it may help fight free radicals in the body and also support healthy aging.

One thing that we didn’t like about the supplement is that it also contains filler ingredients just like most formulas. These include silica, vegetable stearate, and cellulose.

Moving on, each bottle contains 120 gelatin capsules with each retailing at around $0.83 which we think is relatively affordable. 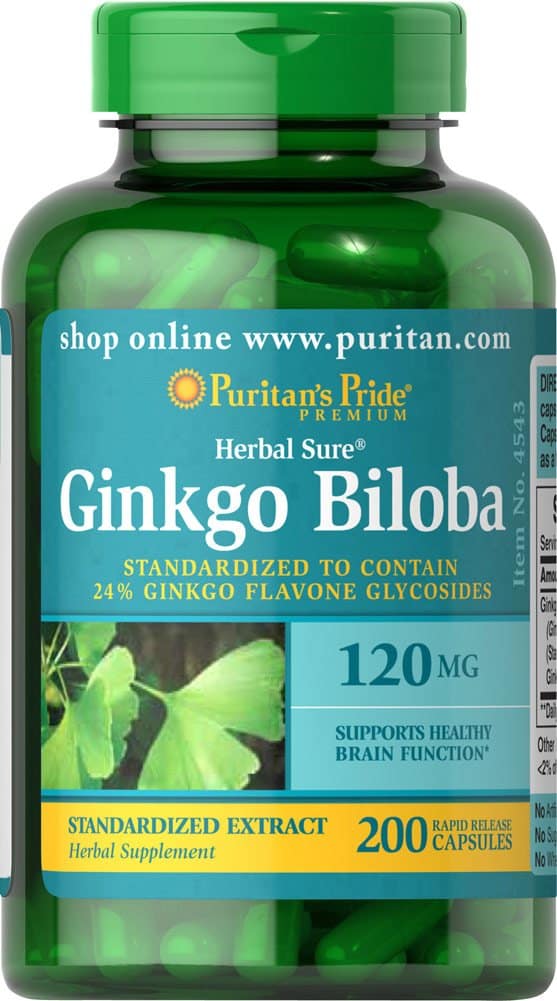 Here is yet another great Ginkgo supplement from the brand Puritan’s Pride. This brand has been in the business of producing supplements, vitamins, and minerals for over 40 years.

Just like their other products, their Ginkgo is manufactured in state-of-the-art facilities to ensure the highest quality formula. Also, the formula is tested and inspected as many times as possible for purity, potency, and consistency.

What’s more? Each capsule is reported to contain 120mg of the leaf extract to ensure you get optimal dosage by simply taking one capsule daily. The extract has also been standardized to contain 24% flavone glycosides which help cells fight damaging free radicals.

More so, each bottle has 100 capsules with each going for around $0.087 which is a bit pricey compared to other products. 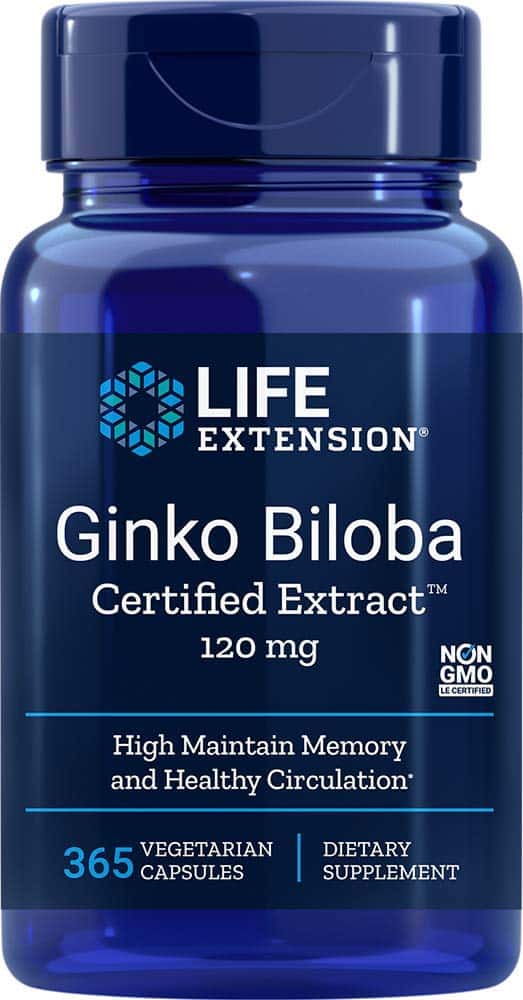 Are you a vegetarian? If yes, you might want to try this Ginkgo supplement from Life Extension. The formula is manufactured by a company that offers a 100% satisfaction guarantee and prides itself on providing product transparency.

What’s more? This dietary supplement comprises 120mg of Ginkgo extract that has been standardized to contain 6% terpene lactones and 24% flavone glycosides. As a result, it is very potent in antioxidant properties.

Also included is 1ppm ginkgolic acid which makes the formula such a cognitive function powerhouse. Other ingredients include stearic acid, silica, and microcrystalline cellulose.

Last but not least, a bottle containing 365 veg capsules costs $29.20. So, each count is only $0.08 which is very affordable given the many numbers of capsules you get. 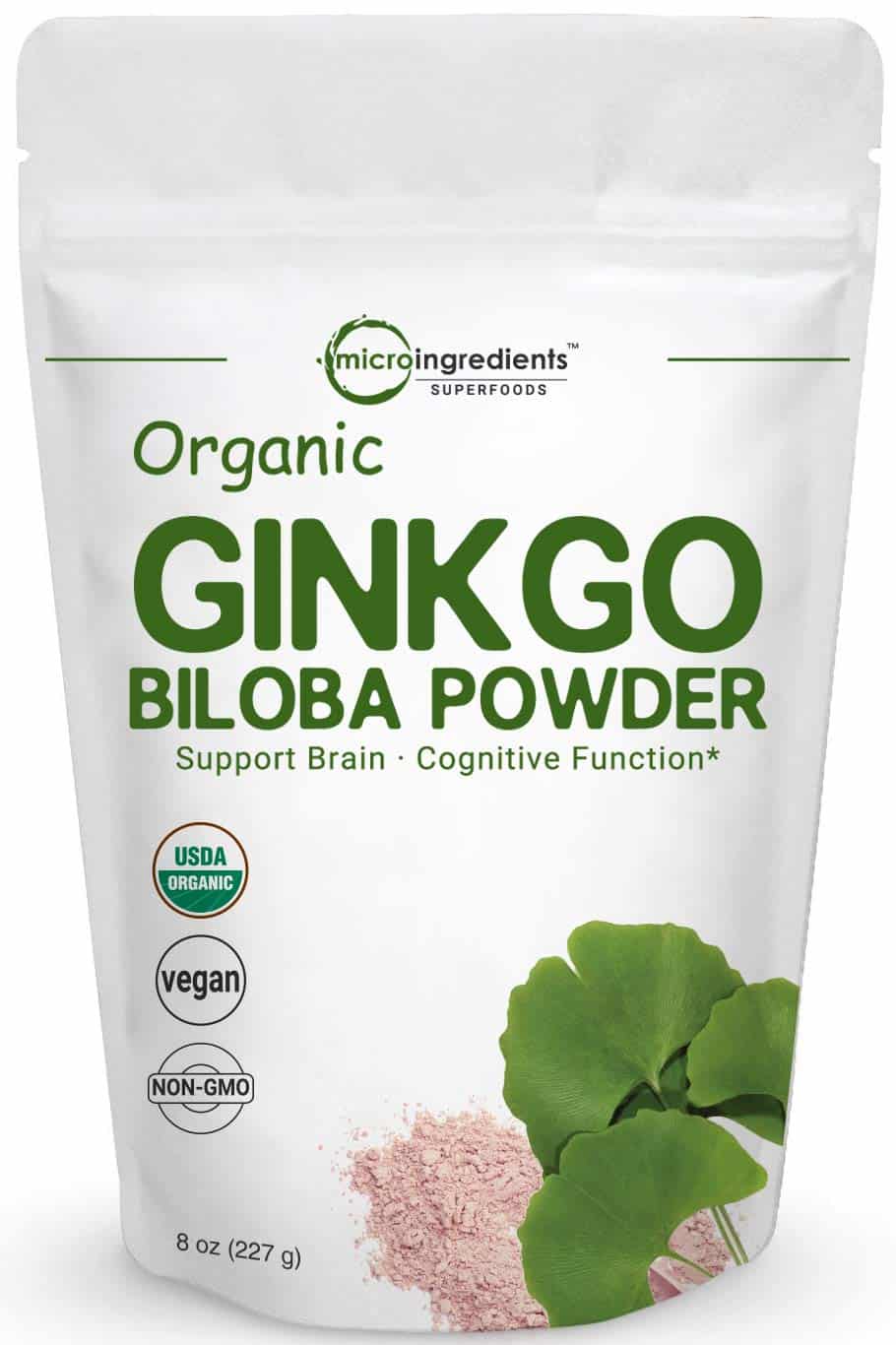 The last product on our list of top 10 best Ginkgo Biloba supplements comes from a company that highly prioritizes quality. This formula is completely all-natural and does not contain any fillers, artificial additives, gluten, colors, GMOs, or preservatives.

However, it comes in the form of powder rather than capsules. As such, some people find it not very convenient to take. The good thing is that it is easily absorbed in the body.

When it comes to ingredients, the powder comprises only organic Ginkgo Biloba extract that has been standardized to 30mg flavone glycosides.

As far as concentration is concerned, the formula boasts 350mg of the extract making it extremely potent compared to the other supplements.

Overall, the best Ginkgo Biloba supplements are made from leaf extracts with a potency that is standardized to 24% glycosides and 6% terpene lactones. They also don’t contain artificial sweeteners, preservatives, flavors or colors.

Most of the above formulas meet these criteria and are manufactured in state-of-the-art facilities to ensure their potency and purity.